The EVO Short Sleeve Jacket is our most technical jacket with the highest level of impact protection available. With strategic D3O® pads and panels, vented compression fabrics and mobility patterns the Evo family stands alone.

D3O® material hardens on impact yet flexes while riding. Fit and technology aside the redesigned EVO collection helped launch the new PADLOCK Connection System, which completely prevents pad migration before and during an impact. With EVO and PADLOCK you will never have to compromise ever again.

The PADLOCK connection system is our newest technology that inner-connects protection pieces so your pads won’t migrate while riding or in the event of a crash. The core of our system is the EVO Jackets and shorts that can snap into an array of our elbow and knee pads.

Goodbye protection migration! Lock it and forget it.

We ship fast! Our stock levels are updated live and most orders placed before 14:00hrs are shipped same-day (Monday to Friday).

REST OF THE WORLD

We offer a no-quibble 30-days refund policy*. There's no need to contact us before returning your item(s). Simply send it back to the following address:

Be sure to include your order number and reason for return. Sorry, but we can't cover, or contribute to, the cost of the return.

This is my first set of MTB body armour - I started MTB like many others during first lockdown riding my local trails in Nottingham (Hemlock Stone). They're pretty gnarly with red/black (some say double black) unofficially rated runs. I've already got full face (Bell Super DH), elbow pads (POC Joint VPD air), and knee/shin pads (Leatt 3.0 EXT) but wanted some back protection as was progressing with dirt jumps and wanted to feel safer when attempting the Stile Cop runs next month. I saw the Sixsixone Evo compression alongside some others and liked that it had back, shoulder and elbow D30 protection.

The chest and hip (technically it covers your anterior superior iliac crest rather than your actual hip but that's just the pedantic anatomist in me!) padding is just foam and is fine but would have been nice to have some D30 there too but I guess that would have added to the price & weight. To be honest it was Sprocket & Gear's price that swayed my choice in the end between a Leatt hard shell one and a Fox D30 one.

Initially I was really annoyed when the Evo arrived though as the sizing was way off and I had followed the Sprocket & Gear plus the Sixsixone official website size guides after measuring my chest etc very carefully. That told me to get a size medium but it was way too small - I'm not a big chap (68kg, 38inch/96cm chest), pretty skinny to be honest and technically on the lower end of the medium size scale for this product however it was like wearing a crop top! The forearm straps were too tight, the neck stretched and the shoulder pads didn't sit correctly. Plus the back padding only seemed to cover the top half of my back offering very little lumbar spine protection. I bought the next size up (large) instead and have returned the medium. The large is much much better for me - the padding now sits right, the strapping on the forearms is spot on and there's no crop top vibes going on anymore. I know it is supposed to be a "compression" jersey but the medium didn't offer any compression, just an uncomfortable squeeze. The large is still close and fits well. I've only had it couple of weeks and only ridden in cold weather (winter currently) so it was a welcome additional layer but not sure what it'll be like in summer.

Incidentally wearing it straight against the skin I think it'll cause some serious nipple rash/chaffing - it feels very harsh against mine anyway! So I've worn it with a t-shirt or vest underneath and that worked really well. The way the elbow pads sit in the sleeves they actually feel much better than my POC dedicated elbow pads as those would often slip with the juddering of riding. There's no movement with the Evo and the additional forearm straps really help keep any stray movement in check but not feeling like a tourniquet. It would be nice if the push stud/poppers that are designed to connected to your short liners actually matched the Endura ones I've got but I guess the idea is you get the Evo shorts as well that will be compatible.

As for actually providing protection when falling, I've not had many falls fortunately so far since taking up MTB but I did managed to fall twice on the Evo's first outing: just skids in wet mud at the end of trails - maybe I was riding more aggressively because I had the padding on. Both times I fell on to my right side and the main brunt of it was on my shoulder. Although I was fine at the time with no skin abrasions or bruising, later that day the right side of my neck, shoulder girdle and trapezius were very sore and have been for the past 3 days but that's down to the jarring of the crash rather than the impact. The D30 shoulder padding certainly seemed to stop any abrasions or superficial bruising which I'm sure I would have had had I not been wearing it.

Overall it's a great bit of kit - comfortable and good coverage plus it barely shows underneath a long sleeve jersey, it just makes me look a bit more buff! Annoying issue with the sizing though so check that before buying and I've not yet tested in hot weather. Would defo recommend. 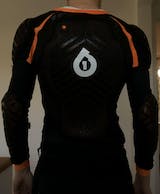 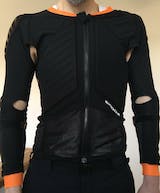 Let customers speak for us

I ordered late on a Thursday and I had the panniers by Saturday morning. They are exactly as described and of great quality so I'm very happy. I can't yet review the longer term quality but they look well made and very sturdy with a very solid fitting that is simple too.

This is a real bargain even at RRP. It's comfy, relatively lightweight, breathable & looks good.
I've had an Urge before but this is better finished. Having tried a couple of full faces for double that didn't fit right, I'm glad I risked this without any real reviews.

Wanted a lock I could carry around on my bike & settled for the Foldylock 90 after reading great reviews.
Fantastic lock! Fits using water bottle mounts, no rattling from lock when moving, simple to use & very well made.
Highly recommended.

Fantastic product I’ve used for 20 years til replacing it with this new one - very clever and useful features and mesh back keep you sweat free. Great range of products, excellent service and speedy delivery - many thanks!

Don’t know you are wearing them, key protection on ankle bones. Good compromise between protection and comfort.
I’m a recreational trail rider, if you are more full on you may need something more substantial.

I bought a pair of carbon fibre Vision TT bars. I noticed one of the bar-end plugs was missing. No big deal and an easy issue to miss. Contacted the company who were quick in engaging the distributor who sent them a spare. They dispatched to me the very next day. Very happy with the love and speed of service.

Other half wanted a helmet to match his new petrol blue road bike. Saw this elsewhere but found it was cheaper here with free delivery. Arrived within a couple of days of ordering. OH also loves it, saying it much more comfortable than his old specialized one. Thanks

This is a very comfortable and nice helmet. It fits perfect and it's very light. It has a good ventilation and the visor can be very easy adjusted. I really liked the colour options!

Does what it says on the tin, this mudguard fit my full suspension stumpjumper perfectly. Thanks

Pleased with replacement bracket. Just a puzzle while two of my lights need replacement,

GIFTS THAT WON'T BREAK THE BANK

Give the gift of cycling with these great gifts and gadgets!

We've put together some great bundles to save you more